What Will Progress in the Coronavirus Crisis Mean for the Economy and Markets?

In the past week, we've seen signs of progress in the coronavirus pandemic. As such, it's a good time to evaluate where we are with containing the virus-and what comes next for the markets and economy. Let's start with taking a look at the data on the virus itself.

The Virus Itself: Signs of Progress

Growth rate. As of this writing (April 22, 2020), the daily case growth rate has been below 4 percent per day for three days in a row. In fact, we've seen the lowest growth rate since the end of February. We continue to be about two weeks behind Italy, which suggests the growth rate will continue to decline in the coming weeks.

New cases. The new cases have also declined, although in a less steady fashion. Case counts have not yet broken below the 25,000 per day level. This level is the next milestone, as a larger base case level has outweighed the slower growth rate. Nonetheless, the downward trend seems fairly consistent over the past month, suggesting we should see the number of new cases per month continue to inch down. 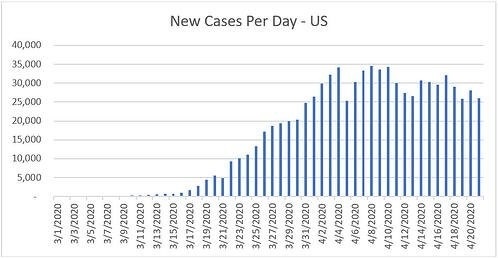 So, Is It Time to Reopen the Economy?

Social distancing restrictions. The real progress in controlling the virus has led to talk of easing social distancing restrictions and reopening the economy-and several states have announced plans to do just that. One concern is that this shift could lead to faster spread of the virus, and this effect is something to watch for. Even if this spread happens, there will be a two- to three-week lag before any new infections show up in the data. So, a continued decline in the spread of the virus over the next couple of weeks will not be an argument for (or against) any such opening.

Lack of widespread testing. Another concern is that when states do open up, more comprehensive testing will be needed to track and isolate infected and exposed people. Opening up essentially means switching from isolating everyone to isolating only those who are sick or at risk. To do so, we need to know who those individuals are. The only way to make this identification is through widespread testing. Testing, however, has stalled at around 150,000 tests per day. 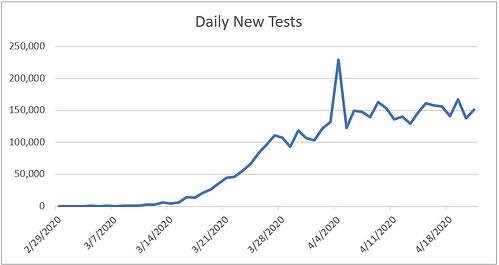 We aren't yet certain about how many tests per day we will need, but initial estimates were in the 1 million per day range. That number now looks too low. In any event, the current test run rate is way too low to support any kind of meaningful surveillance operation to support reopening economies.

High positive test results. Another way to look at where we are now is to examine the percentage of tests that are coming back positive. Ideally, if everyone were being tested, this number should be quite low. In fact, between 15 percent and 20 percent of all tests are coming back positive, which suggests two things. First, the tests are primarily being given to people who are likely sick with the virus. Second, given the limited availability, most people who might have the virus are not being tested. The level of positive results should likely be 5 percent or below. Until we get down to that level, we will not have enough data to reopen economies without risking another wave of the virus.

Not there yet. We have made real progress, but we do not yet have the virus under control. While the daily case growth rate is down to less than 4 percent, that still means that-absent further reductions-the total number of cases will double in the next three weeks. It should also be said that the current gains are not locked in stone. Premature policy changes or a failure of people to observe prudent behavior could unleash the virus again. While we are headed in the right direction, we are not there yet. We must keep that in mind as we look at the markets.

The Market: More Volatility Ahead?

Talk about a roller-coaster ride! Over the past several weeks, markets had the fastest onset of a bear market in history, followed by the fastest recovery into a bull market in history. This kind of volatility is historic. But since it is unprecedented, we can't really look back at history for guidance as to what happens next.

Corporate earnings. We can, however, look at what the market itself is telling us by comparing the recent volatility in stock prices with the expected changes in the underlying fundamentals: corporate earnings. The problem here is that we don't know what earnings will be over the next year or two. But we do have estimates, and we can at least use those as a basis to figure out just how cheap-or expensive-stocks are based on those expectations. That calculation can provide a historical baseline. 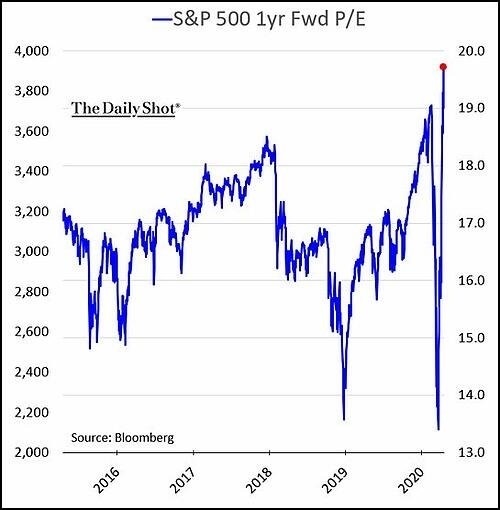 Using that baseline, we can see that when the markets dropped, based on the earnings expectations then, they became the cheapest since 2015. Since then, however, a combination of a market recovery and declining earnings expectations has brought the market to be even more expensive-based on next year's expected earnings-than it was at the peak earlier this year and more expensive than at any point in the past five years.

The Shiller ratio. While concerning, the problem here is that this analysis relies on earnings estimates, which can change and are certain to be wrong. To balance that shortcoming, we can also use a different metric that relies only on historical data: the average earnings over the past 10 years rather than estimates of the future. Because it uses averages over a 10-year period, this metric is less influenced by the business cycle or the abnormalities of any one year. It was popularized by economist Robert Shiller and is known as the Shiller ratio.

The chart below (as of the end of March 2020) shows that despite the sharp drop, valuations closed March at about the level of the peak before the financial crisis. As prices have recovered through April, that ratio has moved even higher. Just as the chart on forward earnings showed the market to be very expensive, this one shows the same based on historical data. 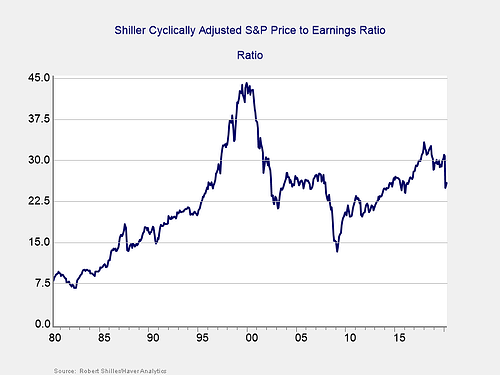 Stocks are not cheap. Between them, these charts tell us two things based on the fundamentals. From the first chart, even if earnings recover as analysts expect, the market is currently very expensive based on those expectations. For the market to outperform, earnings have to recover even faster. From the second chart, even if that recovery happens, the market still remains very richly priced based on history. In other words, whether you look at the past or the future, right now stocks are not cheap.

The wild card. Remember, these conclusions assume that the earnings will meet expectations. Right now, earnings growth is expected to resume in the first quarter of next year. For that to happen, the virus will need to have been brought under control; the U.S. and global economy will need to have opened up again; and, this is crucial, American consumers (more than any other) will need to be comfortable going out and spending money like they did in 2019.

All of this could happen, of course. But as we discussed earlier, the virus is not yet under control, and we might well see a second wave. Economic opening has not even started yet and faces real headwinds. And even if the first two conditions are reached, consumers have to be willing to go out and spend. Current stock prices depend on all three, but none are guaranteed.

That is the context we need to think about when we consider what is next. We will keep making progress on controlling the virus, but setbacks are likely at times. The economy will open and recover, but it might be slow. All of that means we should be cautious about stock prices. There are many assumptions baked into the optimistic analyses, as well as many things that have to go right between here and there. There are also many potential scary headlines that could knock investor confidence. In the best of all possible worlds, current prices make sense. In this world, we should expect more volatility.

Real and substantial progress has been made in both controlling the virus and supporting the economy until it opens again. We know what to do, we are doing it, and it is working. We will get back to something like normal and likely in a shorter time than some fear. Still, we are not done yet, and there is still substantial progress that needs to be made before we can declare victory. Let's not get ahead of ourselves.